Our Technical Bulletin on the subject has received a large number of hits in the last few weeks. We thought it prudent to include it in this month’s Tech-News. For those of you in the special suppression discipline, read on!

Gem Type EA-1 "Protectospray" (as well as heads referred to as "Quencher", "Mistifier", "Economist", etc.) have been delisted by UL for use in protecting commercial cooking deep fat fryer equipment. Nozzles manufactured after October 9, 1997 are no longer UL Listed for water spray protection inside commercial kitchen hoods that employ deep fat fryers. They do NOT meet the requirements of UL-300 (see sample photograph). You can follow the link to Tyco Fire & Security's Data Sheet TFP800 (formerly TD725) for more information. 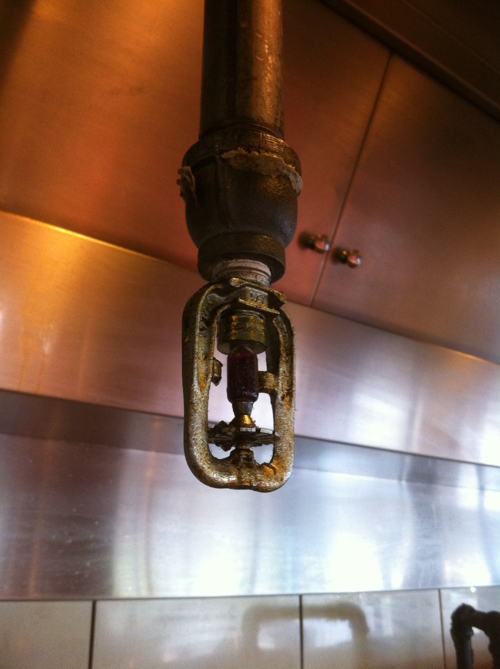 For those of you who haven’t yet seen the graphic video of what happens when you pour water on a deep fat fryer fire, here it is:

Creston, British Columbia - June 2012 marks a significant step forward for the Town of Creston, located in south-eastern British Columbia. Mayor Ron Toyota and the town’s Council have formalized a Bylaw requiring ASTTBC registration for all individuals engaged in the servicing of fire protection equipment within the municipality. A two year grace period will allow companies and technicians the time to complete the registration process. The initiative was launched by ’Crestons Fire Department headed by Fire Chief Bruce Mabin and Deputy Fire Chief Michael Moore. ASTTBC maintains a list of all the British Columbia Municipalities that have adopted a Bylaw requiring formal technician registration!

Researchers at Japan’s Shiga University of Medical Science have developed a scent based alternative to alert the deaf and hard-of-hearing to a fire. They’ve used the extract of the wasabi root in an aerosol form dispensed by a device tied to a smoke detector. The incredibly pungent odour successfully awakened test subjects in as quickly as ten seconds. Current North American solutions utilize under mattress vibrators (or bed shakers) and visual signals.